In The Lab: Caring for Spacefaring Yeast

When Ground Control launches each year, the geekiness level at our brewery certainly reaches a new extreme. Brewed with yeast that traveled to space and back (77.3 miles above Earth to be exact!) we’ve enjoyed sharing this beer with space and beer nerds alike—including the one-and-only Neil deGrasse Tyson. While the thrill and excitement of sending yeast to space is not one to downplay, the care of that yeast back here on Earth is what allows us to brew our delicious Imperial Stout, Ground Control.

We sat down with James, our lab tech and yeast shepherd, to get a look behind the lab door and see what it takes to keep this yeast living on-and-on. Take your protein pills and put your helmet on!

Let’s get down to it. What’s so unique about our space yeast?
It would have been something if the yeast transformed in some way, but at the end of the day we wanted to see if it was possible to send yeast to space and back, and keep it just as it was. Why? Because we know this means we could brew the same delicious beer we brew back at home with space-travelled yeast.

The cool thing about this experiment is that we as humans are able to perform such a feat. If the yeast were to reach space without a controlled environment, it would absolutely perish. There are very few microbes out there that could survive in space and be protected from UV radiation. Brewer’s yeast is not one of them.

Are there particular flavor profiles this yeast carries?
The space yeast has the exact same profile as our House Yeast. Our House Yeast is used in beers like Total Domination IPA, Pacific Rain Northwest Pale, and Vanilla Oatis Oatmeal Stout. We use this strain because the profile of this yeast is clean, fruity, and has high potential for some residual sweetness. You aren’t going to get any phenolics or extremely strong characteristics coming from this yeast. It’s used for a nice, balanced ale that accentuates the hops and/or barley, depending on the style we’re working with. We sent several strains on the rocket with the idea that they would come back with the exact same genetics and fermentation capability.

How do we keep the yeast happy and viable?
We treat our space yeast just as any of our other yeast. There are many different ways yeast can be stored. We use the slant and oil method which involves making a slant of YPD (yeast nutrient agar) and submersing the yeast in mineral oil. They say that it can last about 1-2 years like this, so we “reup” every nine months. This involves taking a small sample from the current slant and growing more cells. These cells are then used to make a new slant which will go through the same process in nine months. Ideally, you wouldn’t have to do this very often because every time you grow more cells you risk some genetic drift.

Can you describe the process of pitching our Space Ale Yeast to each year’s beer?
Every Ground Control batch uses generation 1 of our Space Ale Yeast, meaning we propagate the yeast every time we want to use it. This is because of the extremely high OG (fermentable sugars) of this beer and the fact that it’s the only beer fermented with this yeast strain. Having only one beer that uses a yeast strain really sort of makes us use Generation 1 yeast every time.

How long can we continue to make space beer?
Forever if we have a good yeast management program. We nearly lost it several times which is easy to do if you don’t know what you’re doing (but now we have me)! Our last mission also carried Lager and Alt Yeast strains to space, so there is potential for other “space beer” styles to pop up down the line.

Do you have any personal sentiments to share about working with this space-traveling yeast?
Once I streaked my first plate of it and thought about the fact that that yeast had left our atmosphere it really felt pretty cool. Well technically it would have been the great, great, great grandparents of the yeast that went to space, but still pretty cool.

It’s really exciting to see how people react to this beer and engage with the story. There’s not a lot of beers out there that can spark the same types of conversations. 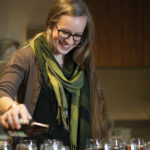 Why We Taste: Inside the World of SensoryBlog

Why We Taste: What does it take to be a professional beer taster?Blog