Stouts vs. Porters: What’s the Difference Between the Two?

February is Stout Month and we’ve been celebrating all things dark beers! Many people often ask, “what exactly is the difference between a porter and a stout?” We’re here to break down the differences (and in some cases, similarities!) between the two. It’s not as clear cut as you may think.

While Ninkasi Brewing is most known for our IPAs, our Oatis Oatmeal Stout has been a community favorite since 2009. Plus, did you know we offer a broad spectrum of beers from crisp pilsners to imperial stouts from our Pilot Brewing system at the Ninkasi Better Living Room?

Historically speaking, one of the main differences between stouts and porters is their location of origin. Porters originally hailed from London, whereas stouts were popularized in Ireland. Both used dark malt to bring out roast, toast, coffee, and chocolate flavors, but the subtleties between the two developed regionally.

Over time, regional styles and preferences developed, leading to sub-categories of each style, from preferred flavors, mouthfeels, and alcohol content. While there may be historical differences, beer innovation has led to exploration among styles from brewers in today’s craft brewing world.

The Aromas, Flavors, and Mouthfeels

There is much debate between the flavor differentiators between stouts and porters. Historically (and generally) speaking, stouts tend to lean more towards a full-bodied mouthfeel and higher alcohol content than porters, which tend to sway lighter-bodied and more subdued in flavor.

But, of course, you can also find Irish Stouts lower in alcohol content which feature a much lighter body than some of their stout counterparts, and vice versa with porters. Plus, more experimental malts and hops have led brewers to experimenting with different flavor profiles within all categories of beer.

Here are the “overall impressions” from the Beer Judge Certification Program (BJCP) guidelines for each subcategory of porter. Of course, each of these styles go much more in-depth in the judging guidelines in terms of aroma, flavor, mouthfeel, appearance, and history.

A Baltic Porter often has the malt flavors reminiscent of an English porter and the restrained roast of a schwarzbier, but with a higher OG and alcohol content than either. Very complex, with multi-layered malt and dark fruit flavors.

A moderate-strength brown beer with a restrained roasty character and bitterness. May have a range of roasted flavors, generally without burnt qualities, and often has a chocolate-caramel-malty profile.

A substantial, malty dark beer with a complex and flavorful dark malt character.

Once again, are the “overall impressions” from the Beer Judge Certification Program (BJCP) guidelines for each subcategory of stout. And don’t forget: each of these styles go much more in-depth in the judging guidelines in terms of aroma, flavor, mouthfeel, appearance, and history.

A black beer with a pronounced roasted flavor, often similar to coffee. The balance can range from fairly even to quite bitter, with the more balanced versions having a little malty sweetness and the bitter versions being quite dry. Draught versions typically are creamy from a nitro pour, but bottled versions will not have this dispensederived character. The roasted flavor can be dry and coffee-like to somewhat chocolaty.

A fuller-bodied black beer with a pronounced roasted flavor, often similar to coffee and dark chocolate with some malty complexity. The balance can range from moderately bittersweet to bitter, with the more balanced versions having up to moderate malty richness and the bitter versions being quite dry.

An intensely-flavored, big, dark ale with a wide range of flavor balances and regional interpretations. Roasty-burnt malt with deep dark or dried fruit flavors, and a warming, bittersweet finish. Despite the intense flavors, the components need to meld together to create a complex, harmonious beer, not a hot mess.

Like many beer styles, stouts and porters developed similarly in parallel with subtle differentiators due to regional preferences and techniques. While traditional styles are defined by specific characteristics, there’s a great deal of overlap between the two styles in today’s innovative brewing culture.

How do you define the difference between porters and stouts? What are some of your favorite examples? 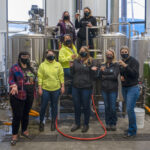